Possibly the scarcest set in all of Pokémon, 1997 TOMY Pokémon Scratch cards are seriously cool. Gameplay required the scratching off of boxes to reveal moves in battle.

As a result, most were degraded and many thrown away, so they’re TOUGH to find in “unscratched” condition, especially mint.

Heck, even the scratched ones are tough. PSA grades these as either ‘scratched’ or ‘unscratched’ in the pop report.

There are six “prisms” / holo cards. One in every five packs has a prism card, on average. Since there are 15 packs in a booster box, a sealed box will contain three prism cards. On average, it would take 30 packs to pull a Charizard!

Tomy Scratch cards were released in May of 1997, just after Japanese Base, Carddass & TopSun, to become the 4th major Pokémon set and the 2nd playable trading card game (TCG). Amazing OG Sugimori art, too. 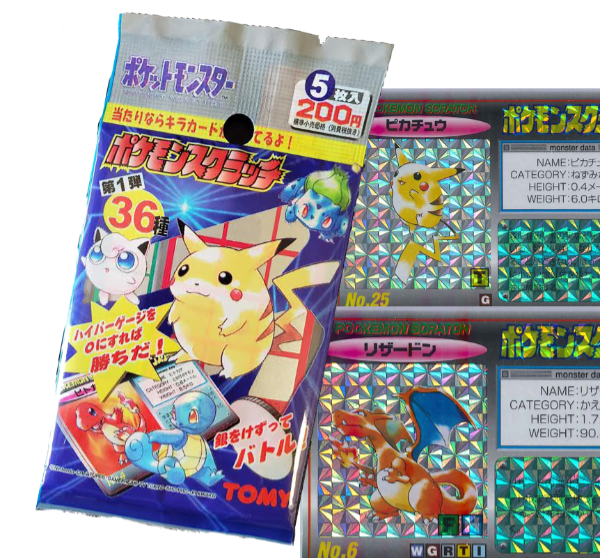 These cards put 1999 1st Edition Base Pokemon cards to shame (in terms of scarcity).

Ha! Pops of these amazing TOMY cards (in all grades) are often in the single digits. PSA and BGS both grade these cards.

With original Ken Sugimori artwork (some of which would later appear on other sets), Pokémon character and Japanese vintage Pokémon collectors covet this set.

See the chart below for comparison to other ‘rare’ sets

Series 1 has 36 total cards, including six holos (Charizard, Pikachu & more). Click here to view them all.

Most Tomy Scratch cards have single digit graded populations, if any graded at all. View pop reports here.

I’ll show you how to search for these cards, whether domestic or from Japanese platforms and proxy buyers.

Released in May of 1997 in Japan, view the historical ads and details of Pokemon Scratch cards here.

You thought series 1 of Tomy Scratch was scarce. Series2 is even tougher, with another 36 characters w/ 6 different holos.

I am always seeking fellow collectors of Scratch to chat with and happy to answer questions here or on Insta!

Comparing 1997 TOMY to other Pokémon sets

Let’s take a look at how the two most graded 1997 TOMY cards (Charizard & Pikachu) stack up when compared to some other PSA graded sets in terms of population reports. 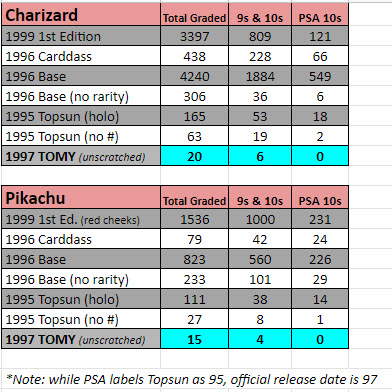 I am always buying collections, cards and sealed packs or boxes of 1997 Pokemon / Tomy Scratch cards. If you have any for sale, especially unscratched cards and holos, please get in touch. Send photos and a brief description to me via email by clicking the button below!

I collect pretty much all of the “FIRST FOUR” of Pokemon cards, including 1996 Carddass, 1996 Japanese Base and 1997 TopSun. These are the true “vintage” cards of Pokemon, the Honus Wagners, Mickey Mantles and Babe Ruths of the hobby.

Hey, I’m not too good for the USA cards. The first US release comes long after the “First Four” out of Japan, including 97 Tomy Scratch, 96 Japanese Base, 96 Carddass and 97 TopSun (blue backs, green backs and no number) cards. I collect vintage US cards, too! 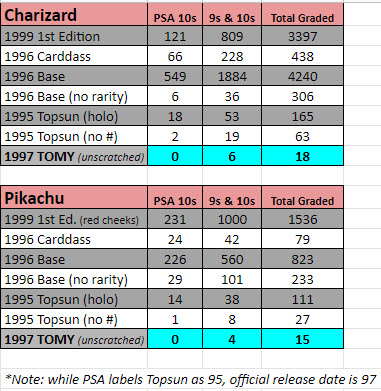